During WW2, Australian soldiers in East Timor hired criados, who started out as ‘helpers’, but became so much more.

The word ‘criado’ fails to describe the relationship between these young Timorese and their soldiers— a deep bond of friendship and mutual respect was forged, which still exists today.

These boys, whose ages mostly ranged from 8-15, often put their lives at risk, working as an extra pair of eyes and ears for their Australian.

This matching resulted in extraordinary success, in almost impossible conditions.

Australian guerrillas in East Timor, sorting Australian coins, on pay day. Timorese helpers preferred Australian money. Australian soldiers had haversacks of silver coins which they used for the procurement of supplies, remunerations etc. When this was depleted, more was sent from HQ in Darwin.

In 1943 the 2/4th Commandos were finally withdrawn from Timor, under extreme circumstances.

Criados, some of whom were orphans, were not allowed to go with their soldiers, which caused much distress to both soldiers and criados.

Some of these boys remained on the beach after the Australians departed and were easily identified as being helpers to the Commandos. These boys paid the ultimate price. (We understand that Douglas was one of them.)

In 1943, after the withdrawal of Australian troops, leaflets were dropped from aircraft. These leaflets were aimed at reminding Timorese people of their friendship with the Australian soldiers. 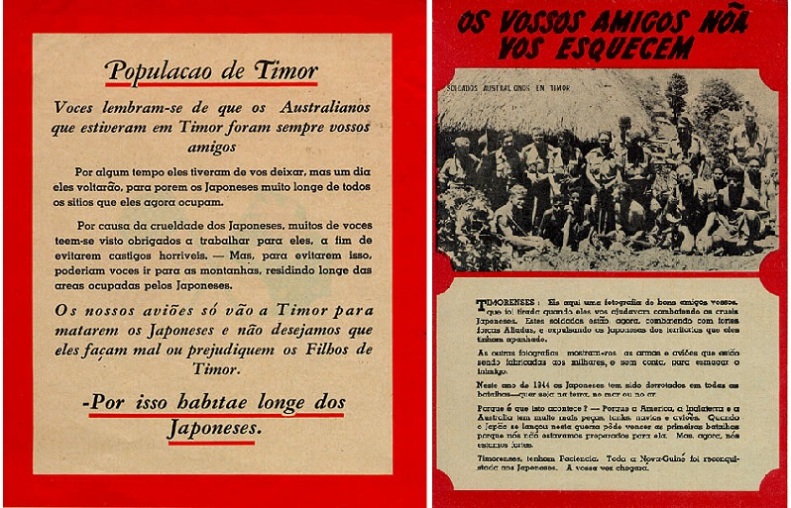 “People of Timor…
You remember when the Australian soldiers were in Timor they were your friends. For a time they had to leave you. But one day they will return… Your friends do not forget you.“